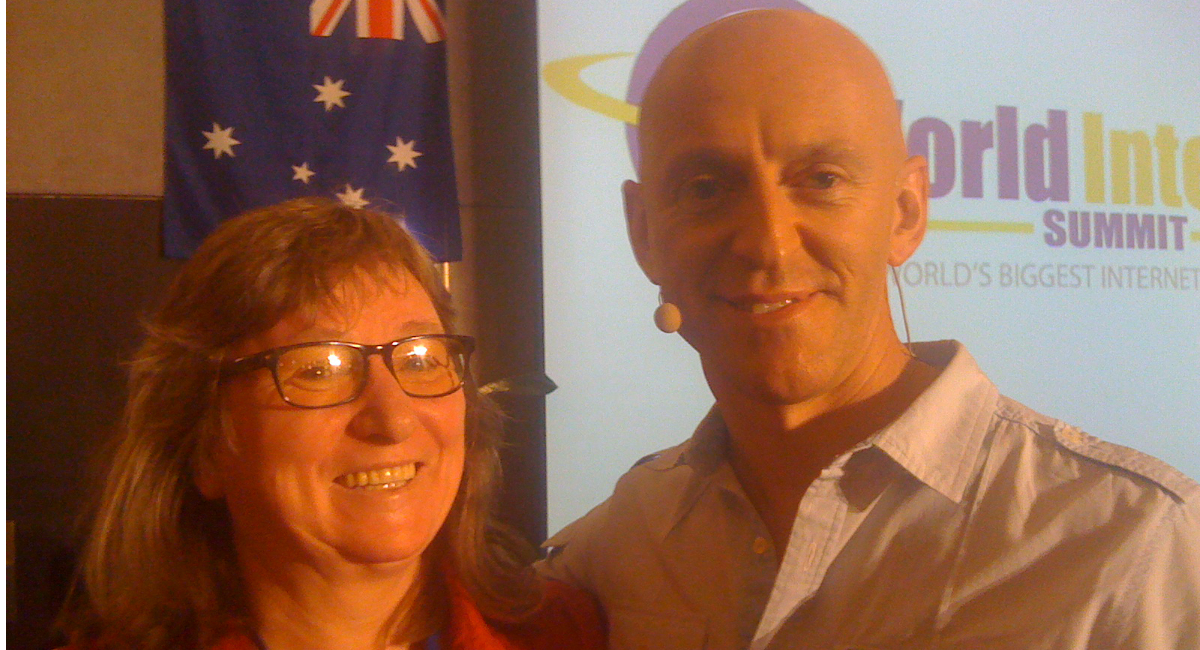 Follow that dream of yours until it is a reality.

Have you ever had a clear vision of what you want in life? A vision so clear that you could just reach out and touch it.

Seriously I need to follow that dream. The internet and especially building websites are my Passion. I have seen great marketers make huge amounts of money from their businesses. So I set out to work out just how they did it.  I devoted the few years to learn. There is a lot involved in building an internet business. The more I learned the more I wanted to build my own Internet Empire with multiple streams of income. I wanted to follow that dream then came the skeptics.

Many times in my life I had been told  that “following your dreams” was a total waste of time. That was because “they” the skeptics could not see the big picture. This will give you an example. I am an artistic person and I admired the Painters like Tom Roberts. How sculptors managed to get so much detail into their statues. From as far back as I can remember and I wanted to be like them.  I had the skills but my Dad said art was a waste of time.  His word was final.

At that time I had a dream to do something artistic that made good money.  Quietly I studied to become a sign-writer, the old traditional kind. I wanted to follow my dream so bad and of course I had to prove my Dad wrong. Later I became a successful sign-writer.

I am sure you have seen this all before. Having your dreams ripped to shreds before you even get started on a project. This was especially so when I wanted to pursue an internet business.  There are always the excuses like we don’t want you to get ripped off or get disillusioned when it all crashes down. All I wanted to do was follow that dream but I was so disillusioned.

The trigger point that made me follow my dreams…

I still had to give building my Internet Empire a go. In the past I had a number of websites up.  I must have started back when HostGator first started hosting and that was a long time ago now.

About five years ago I was diagnosed with Cancer. The same cancer that had just killed my Dad.  At the time I thought I was going to die too. I took almost all of my sites down leaving just my big site newtopproducts.com left.

I decided that there was one thing I wanted to do before I died just so I could follow that dream. There was an opportunity  to attend The World Internet Summit in Queensland. I delayed surgery for a few days so I could go. The event was over five days. I had just enough money to cover the cost and pocket change to get me through the week. I learnt so much from all the speakers at this advent. Here I am with Brett McFall up on stage. This had sparked such a burning desire in me to just had to get back into my websites but not just websites. I had to learn all the other parts of the business too. I was determined to follow that dream.

The fact that I was to face surgery meant nothing now. I just wanted the Internet life style. After two operations the cancer was gone. I have had various other skin cancers since then but none as life threatening as the Melanoma. I guess you become more aware of what can happen to you but I was not going to let anything get in my way now.

In 2016 I moved my huge New Top Products site to a bigger server and during the American elections that server crashed. Many other servers crashed during the mass cyber attacks late that year. I lost everything including a 10,000 list for that site.

Well I come crashing down too late that year.  I lost my servers, my home and my health but not my dreams. I’m not one to quit. I gave myself time to recover and now I am back determined to follow that dream to build a big Internet empire. Then make enough money to start building my units, but that is another dream for a later time.

The one thing I learnt from that experience is never have all your eggs in one basket. I now have different servers and different websites for each part of my business. Yes I said Business. If I was going to do this right then I  decided I would treat my online dream as a Business.

I became serious about following that dream…

I gained a place in the NEIS program here in Tasmania. The NEIS program takes you through the process of putting together a Business Plan including all the legal and taxation side of the business. NEIS pay a subsidy for nine months to help you live while you get established.

As a further commitment I invested in a One On One Mentoring Program to help me get my Online Business established. My mentor is John. He and his team are marketing experts. It is their job is help me with getting my products produced and marketed. John’s team also help me promote those products over the year.  I just have to put the work into producing them.

My poor little laptop has had a hard life, I have tested it to the point of crashing it a few times even though I can rectify any problems. I decided to get a couple New computers to make life easier. A big 27″ 5K iMac for processing video and graphics. My Product Production Website. A 27″ 4K touch screen Asus Windows Computer for all the accounting, social integration and website work. My laptop is connected to the big screen so I can see it will be used it exclusively for training and email.

Three dedicated computers makes it easier to concentrate on those tasks in one area. One computer is is too messy as I often work three jobs at once and the screen becomes cluttered. Yes I do have three things happening at once often… It is no different than running an orchard in the peak of fruit season, or raising 6 kids. I learnt to have eyes in the back of my head. Many times I have said that multi tasking is something I have become good at over the years.

Now I have the practical experience, the equipment I need, people to help and support me. I no longer have to prove anything to anyone for this is my journey. This is my dream and it is time to get to work and follow that dream… 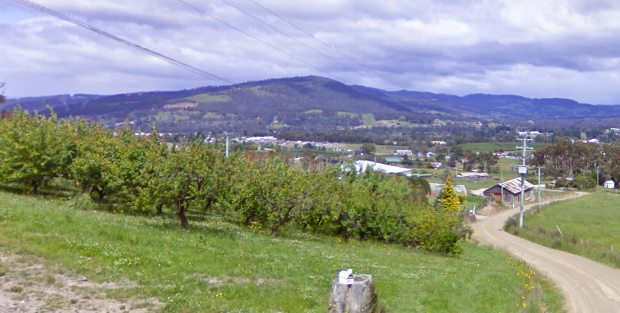 A few decades back I was planning a stone fruit orchard  from scratch and raising six kids and working on the apple orchard during the apple season. Planning that Orchard is a lot like planning my whole Online Business… Back in my orcharding days we had a young family. A large family becomes expensive. We would… 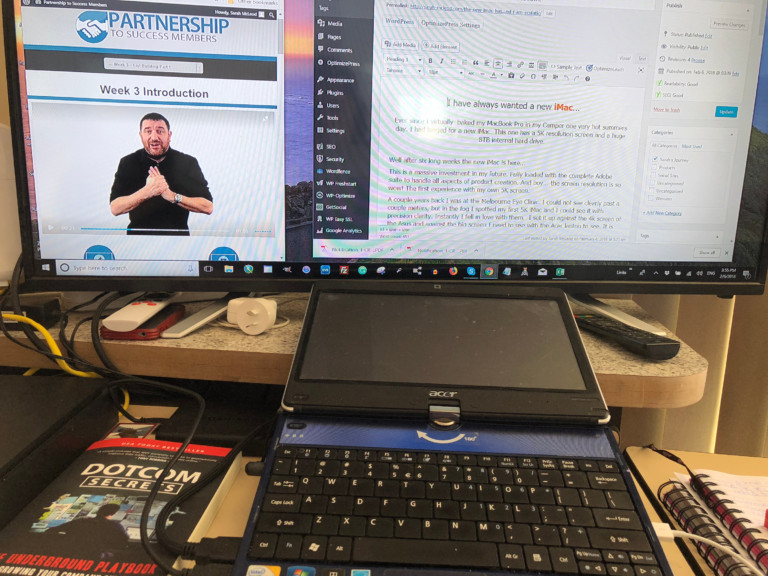 To Start A New Venture You Really Need a Mentor To Guide You On that Journey… Trying to achieve anything on your own is hard without a guide.   I found it was a lot easier to understand a topic once I got a mentor. I simply had to follow instructions. It did not matter what I… 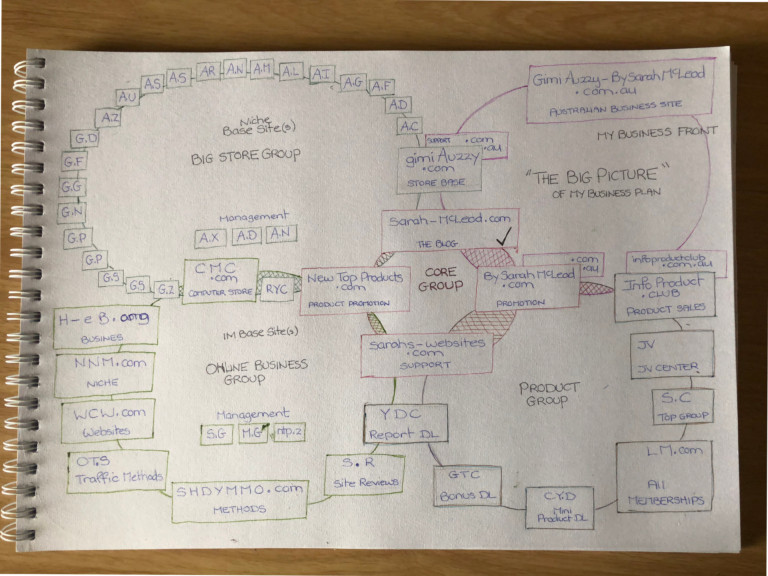 The Big Picture The big picture is so you know which direction to take. It is an overview of your Business…   The big picture for me is sketching the plan of my online business on paper so I can see what it is that I am aiming to achieve. It gives me a visual… 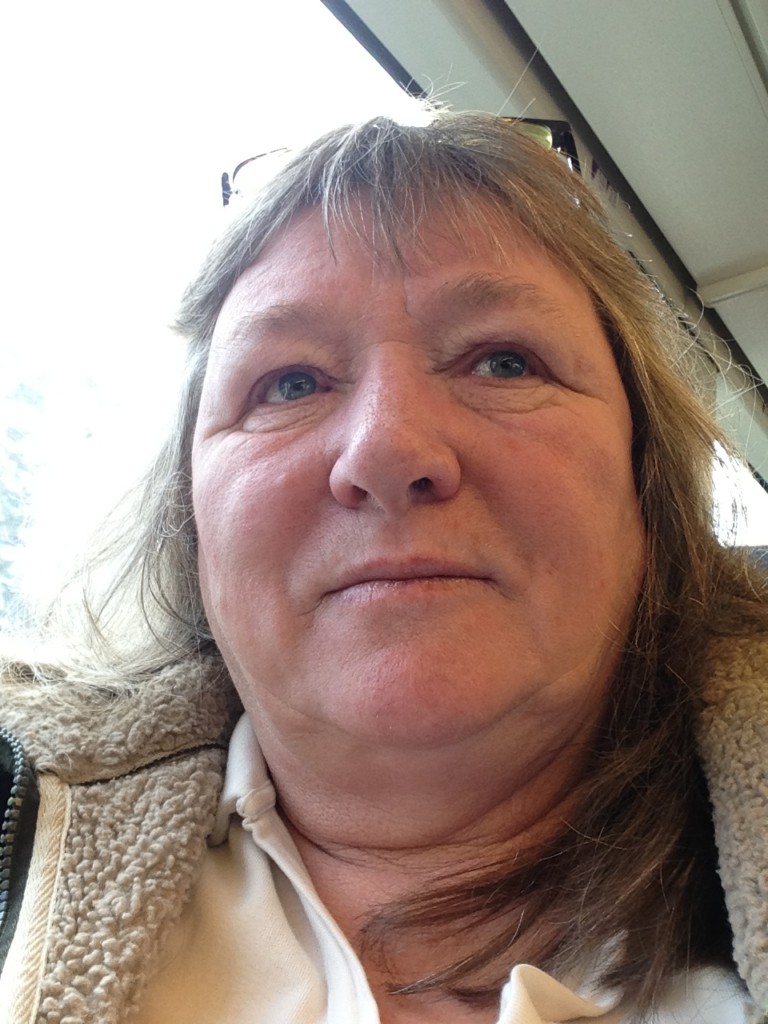 I was not always Sarah McLeod I Started as Denise Roberts, and before I changed my name I was a whole different person… I was my father’s daughter Denise Roberts. My husband’s wife Denise Dowling and my children’s mother Mum, though that will never change. I had no time to be me or follow my dreams…. 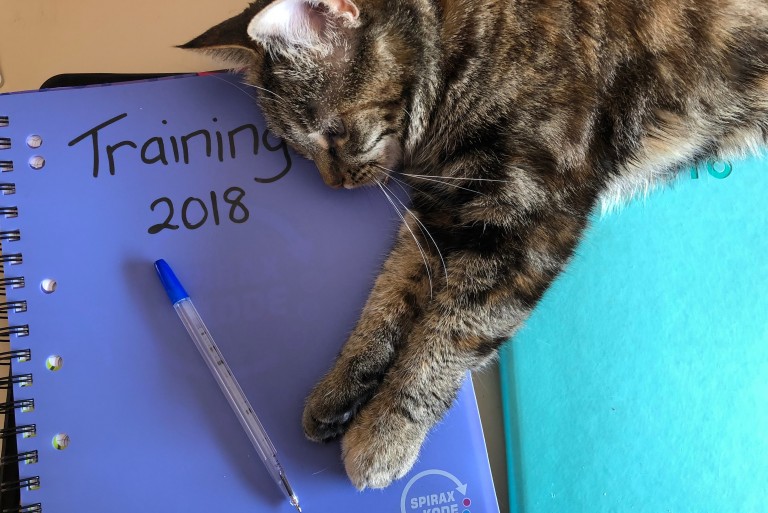 For the past months I have spent way too much time training and no where enough time implementing my sites and products.  Why Too Much Time Training… There is a lot to understand when you want to setup a full time online Business. I am not talking about a single website business, that will only…

New Changes Online The internet is a changing platform and we are constantly adjusting to the new changes online… New changes online mean readjusting the Business Plan to cater to a handful of groups who try and control what everyone else can or can not do online. It was becoming overpowering keeping up with the…